Lincoln and the Bill of Rights 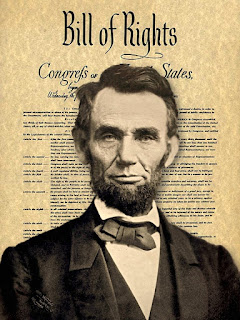 Congress shall make no law respecting an establishment of religion, or prohibiting the free exercise thereof; or abridging the freedom of speech, or of the press; or the right of the people peaceably to assemble, and to petition the government for a redress of grievances.

You will take possession by military force, of the printing establishments of the New York World and Journal of Commerce… and prohibit any further publication thereof….you are therefore commanded forthwith to arrest and imprison…the editors, proprietors and publishers of the aforesaid newspapers.
~Order from Abraham Lincoln to General John Dix, May 18, 1864

A well regulated militia, being necessary to the security of a free state, the right of the people to keep and bear arms, shall not be infringed.

As part of Lincoln’s plan to squelch all opposition, he did try to confiscate firearms and of course, opposed any who took up arms to protect their homes and land.

No soldier shall, in time of peace be quartered in any house, without the consent of the owner, nor in time of war, but in a manner to be prescribed by law.

Considering that Lincoln insisted that the South was still part of the Union, he violated this one by quartering Federal troops in Southern homes. There are hundreds of stories of civilians’ homes occupied, trashed and even burned to the ground by Lincoln’s troops. In fact, General Wade Hampton’s home here in South Carolina was one of the places that met this sad fate.

The right of the people to be secure in their persons, houses, papers, and effects, against unreasonable searches and seizures, shall not be violated, and no warrants shall issue, but upon probable cause, supported by oath or affirmation, and particularly describing the place to be searched, and the persons or things to be seized.

Lincoln definitely violated this one by arresting without probable cause many who disagreed with him. Here is an example:

One victim of Lincoln’s suppression of Northern newspapers was Francis Key Howard of Baltimore, the grandson of Francis Scott key. Howard was imprisoned in Fort McHenry, the very spot where his grandfather composed “The Star Spangled Banner,” after the newspaper he edited criticized Lincoln’s decision to invade the South without the consent of Congress and his suppression of civil liberties in Maryland. After spending nearly two years in a military prison without being charge and without a trial of any kind, Howard wrote a book about his experiences title “The American Bastille.” (from The Real Lincoln, by Thomas DiLorenzo, p. 134)

No person shall be held to answer for a capital, or otherwise infamous crime, unless on a presentment or indictment of a grand jury, except in cases arising in the land or naval forces, or in the militia, when in actual service in time of war or public danger; nor shall any person be subject for the same offense to be twice put in jeopardy of life or limb; nor shall be compelled in any criminal case to be a witness against himself, nor be deprived of life, liberty, or property, without due process of law; nor shall private property be taken for public use, without just compensation.

Lincoln suspended habeas corpus on April 27, 1861 and ordered the military to enforce his suspension. This was such a flagrant violation of the Constitution that Chief Justice Roger B. Taney responded and issued an opinion saying the president had no lawful power to suspend habeas corpus. Lincoln promptly issued an arrest warrant for the Chief Justice, but it was never carried out as Lincoln couldn’t find a federal marshal with the nerve to do such an unconstitutional act as arresting the Chief Justice.

In all criminal prosecutions, the accused shall enjoy the right to a speedy and public trial, by an impartial jury of the state and district wherein the crime shall have been committed, which district shall have been previously ascertained by law, and to be informed of the nature and cause of the accusation; to be confronted with the witnesses against him; to have compulsory process for obtaining witnesses in his favor, and to have the assistance of counsel for his defense.

Lincoln did not give speedy trial to many of the people he jailed, as evidenced by the example of Francis Key Howard above.

In suits at common law, where the value in controversy shall exceed twenty dollars, the right of trial by jury shall be preserved, and no fact tried by a jury, shall be otherwise reexamined in any court of the United States, than according to the rules of the common law.

This may be one of the only amendments in the Bill of Rights that Lincoln did not violate.

Excessive bail shall not be required, nor excessive fines imposed, nor cruel and unusual punishments inflicted.

As an example of a violation of this amendment, Congressman Vallindigham was deported from the United States for daring to declare his opposition to Lincoln’s policies. If being torn from your own country, property, and family isn’t cruel and unusual punishment, then it's difficult to imagine what would be.

The enumeration in the Constitution, of certain rights, shall not be construed to deny or disparage others retained by the people.

Lincoln denied many rights to many people, whether they were enumerated in the Constitution or not.

The powers not delegated to the United States by the Constitution, nor prohibited by it to the states, are reserved to the states respectively, or to the people.

Lincoln’s plan (which ultimately succeeded through the 14th amendment) was to take power from the people back to the Federal government. He was a proponent of big, centralized government. He inherited his views from Henry Clay, whom he greatly admired, and the Whig party which eventually became the early Republican party.

Even though the large majority of Americans, North and South, believed in a right of secession as of 1861, upon taking office Lincoln implemented a series of unconstitutional acts, including launching an invasion of the South without consulting Congress, as required by the Constitution; declaring martial law; blockading the Southern ports; suspending the writ of habeas corpus for the duration of his administration; imprisoning without trial thousands of Northern citizens; arresting and imprisoning newspaper publishers who were critical of him; censoring all telegraph communication; nationalizing the railroads; creating several new states without the consent of the citizens of those states; ordering Federal troops to interfere with elections in the North by intimidating Democratic voters; deporting a member of Congress, Clement L. Vallangidham of Ohio, for criticizing the administration’s income tax proposal at a Democratic Party rally; confiscating private property; confiscating firearms in violation of the Second Amendment to the Constitution, among other things.
(from the Real Lincoln, by Thomas DiLorenzo, p. 132)

In other words, Lincoln trashed the Constitution and the Bill of Rights!