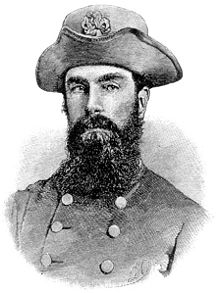 Maxcy Gregg was born in Columbia, South Carolina, and was the great-grandson of Esek Hopkins, a commodore of the Continental Navy, and grandson of Jonathan Maxcy, the first president of South Carolina College (now called the University of South Carolina). Gregg attended South Carolina College, and graduated 1st in his class in 1836. He then studied law, was admitted to the South Carolina bar in 1839, and settled into practicing law with his father. Gregg was considered a man of “keen intellect” and followed many scholarly pursuits, coming to be considered an authority in ornithology, botany, and astronomy (having his own private observatory built to study the constellations). He was a very respected member of Columbia society.

From 1839 until the outbreak of the WBTS, Gregg was very active in state and regional politics. He served in the Mexican War as a major in the 12th U. S. Infantry, but saw no action, and returned to his law practice in South Carolina at its conclusion.

Always a strong advocate for States Rights, he was considered to be one of South Carolina’s “Fire Eaters”. In 1858, he authored a pamphlet entitled “An Appeal to the States Rights Party of South Carolina”, which became a “secessionists’ manifesto”. It rejected incorporation into the Democratic Party over the tariff controversy. A major proponent of secession, Gregg was a member of the state secession convention and “jubilantly voted to leave the Union in December 1860.”


The following information is taken from – findagrave.com [FG] and civilwarreference.com [CWR].

The [South Carolina state secession] convention authorized a 6 month regiment, giving the command to him [Gregg], with the rank of Colonel. After he and his volunteers participated in the bombardment of Fort Sumter, in April 1861, they moved north to Virginia, where they spent the spring months drilling and picketing. When their term expired, many in the regiment returned to their homes, missing the First Bull Run Campaign [First Manassas, July 21, 1861]. [FG]

At the expiration of the term of enlistment [Gregg] reorganized his regiment in South Carolina, and returning to Virginia was stationed at Suffolk. In December, 1861, he was promoted to brigadier-general and ordered to South Carolina, where he took command of a brigade composed of the First, Twelfth, Thirteenth and Fourteenth regiments. With this brigade he was attached to the famous light division of A. P. Hill for the Seven Days' campaign before Richmond. He led the advance of the division at Cold Harbor [also called the Battle of Gaines’ Mill, on the third day of the Seven Days Campaign], crossing the creek under fire made what Hill pronounced "the handsomest charge in line I have seen during the war," and during the remainder of the battle displayed undaunted bravery. At Frayser's Farm [on the sixth day of the Seven Days Campaign] he charged and captured a Federal battery. [CWR]

It should be noted the men in [Gregg’s] brigade were men of privileged backgrounds, including doctors, and lawyers. In the Seven Days' Campaign his South Carolinians suffered more casualties than any other brigade in Major General Ambrose P. Hill's Light Division. [FG]

Assigned a reserve role at Cedar Mountain, on August 9 [1862], the brigade fought tenaciously 3 weeks later at Second Bull Run [Second Manassas, August 28-30, 1862]. During this searing battle, he walked along the brigade's line, fearlessly exposing himself and encouraging his men. His conduct moved Hill to say that "he is the man for me." He became one of only 2 brigadiers, (Dorsey Pender was the other), who had free access to Hill. [FG]

At the battle of August 29th, on the plains of Manassas, he with his comrades of the division, fought "with a heroic courage and obstinacy almost beyond parallel," repelling six determined assaults of the enemy, who sought to overwhelm Jackson's corps before Longstreet could arrive. Hill reported: "The reply of the gallant Gregg to a message of mine is worthy of note: 'Tell General Hill that my ammunition is exhausted, but that I will hold my position with the bayonet.'" In the battle of the 30th and at Ox Hill on September 1st, he was again distinguished. [CWR]

At Antietam on September 17 he was slightly wounded by the Federal volley that killed Brigadier General Lawrence O. Branch. [FG] [Gregg found the bullet the next morning at breakfast when he opened his handkerchief.]

He [Gregg] participated in the capture of Harper's Ferry [September12-15,1862], at Sharpsburg [September 17, 1862] shared with distinguished gallantry in the heroic work of the Light division, which reached the field in time to save the Confederate right, and was wounded in the fight; and at Shepherdstown [September 19-20, 1862], after the crossing of the Potomac by the army, commanded the line of three brigades which drove back and terribly punished the enemy's forces, which had the temerity to pursue the lion-hearted veterans of Lee's army. [CWR]