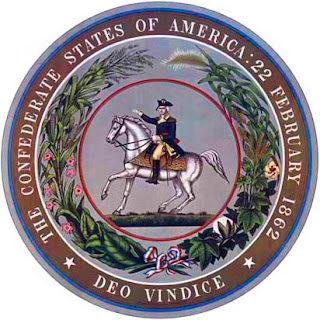 The margin of the seal features the words "The Confederate States of America: 22 February 1862" and the national motto, Deo Vindice, which can be pronounced 'VIN de say' or 'WIN de kay.' Deo Vindice can be translated a number of ways, including "Under God, Our Vindicator" or "With God as [our] Champion."

The date on the seal commemorates the inauguration of Jefferson Davis as President of the Confederate States of America and is also Washington's birthday.

The seal was designed shortly before the end of the War Between the States.