Flags of the Confederate States of America 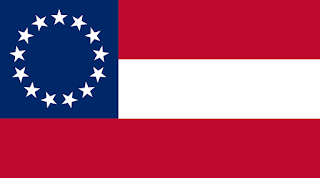 The first official flag of the Confederacy, known as the First National Flag, was also called The Stars and Bars (flown from March 5, 1861 to May 1863). Meeting in Montgomery, AL, one of the first acts of the Provisional Congress of the Confederate States was to appoint a "Committee on the Flag and Seal," chaired by William Porcher Miles of South Carolina. Many suggestions from the public were considered, including popular support for a flag similar to the Union's Stars and Stripes. The Stars and Bars design was approved by the committee, but eventually proved to be too similar to the Stars and Stripes. It caused confusion at the first battle of Manassas when General Pierre Beauregard delayed because he could not distinguish which flag was being flown by the approaching troops. To avoid battlefield confusion, a new flag was needed. 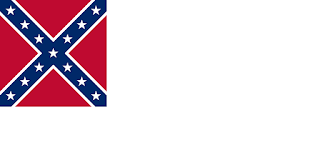 The Second National Flag was created and put into service on May 1, 1863. Called the Stainless Banner because of the predominant white field in the design, it was said to refer to "the unspotted virtue and honor of Southerners and their fight for independence from the tyranny and aggression of northern states." This flag was also nicknamed the Stonewall Jackson Flag because it was used to cover General Stonewall Jackson's coffin at his funeral. This flag had a problem, however. On a calm day it was sometimes mistaken for a flag of truce or surrender because the white field often concealed the rest of the design. The Second National was also adapted as a naval ensign in 1863 and was the only ensign taken around the world (on board the CSS Shenandoah) and was the last Confederate flag lowered at the end of the war (November 7, 1865 on board the CSS Shenandoah at Liverpool, England). 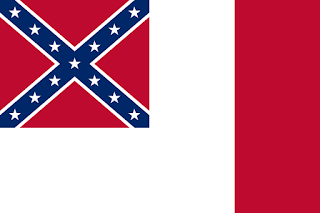 The Third National Flag was adopted on March 4, 1865, shortly before the end of The War for Southern Independence and flew briefly over the Capitol at Richmond, Virginia. The red stripe on the end of the white field was added to distinguish it from a flag of truce or surrender, which had been a problem with the Second National Flag. It was sometimes called The Blood-stained or The Blood-dipped Banner. The few flags actually made prior to the end of the war were simply modified 1863 naval ensigns with a red bar added. Given its short usage, this is the rarest of the Confederate national flags. 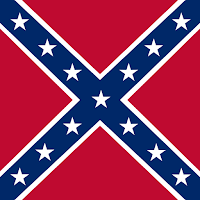 The most recognizable flag today is The Battle Flag, often erroneously called The Confederate Flag. It was envisioned to be "a war flag to be used only on the field of battle" and "entirely different from any State or Federal flag." This flag was designed by William Porcher Miles of South Carolina, Chairman of the Committee on the Flag and Seal. His design was inspired by one of the many 'secessionist flags' flown at the South Carolina secession convention of December 1860. General Johnston suggested making the flag square instead of the usual rectangular shape. General Beauregard agreed and the first set of new battle flags were formally received by the Army of Northern Virginia on November 28, 1861. Sometimes called St. Andrews Cross, Beauregard's Flag, The Southern Cross (which actually refers to the rectangular Confederate Navy Jack), or the Virginia Battle Flag, it is properly called The Flag of the Army of Northern Virginia. 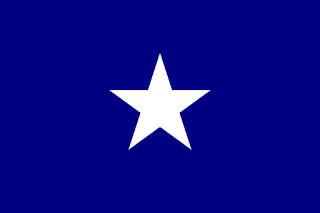 The Confederate government never officially adopted The Bonnie Blue Flag, but the people did. The first recorded use of a lone star flag actually dates back to 1810 when the English-speaking people of Spanish West Florida rebelled against Spanish rule. The dragoons who helped overthrow the dictatorial governor carried a lone-star flag and raised it over their new republic. Twenty-nine years later, the Republic of Texas adopted a similar national flag, changing the star from yellow to white. Twenty-two years later, the lone star flag flew again as the unofficial flag of the Republic of Mississippi in 1861. Harry McCarthy was inspired to write the song, "The Bonnie Blue Flag," which became the second most popular patriotic song of the Confederacy. 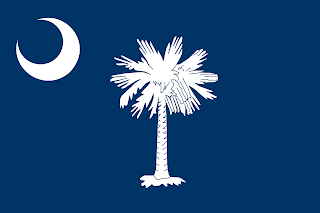 The original Flag of South Carolina is believed to have been designed in 1775 for South Carolina's use during the first war of secession, commonly known as the American Revolutionary War. This makes South Carolina's flag a true secession flag. Elements that compose the current flag were actually seen as far back as 1765 during South Carolina's protests of the Stamp Act. With the addition of the palmetto tree, the current version was adopted on January 28, 1861, as the "national" flag of the newly seceded South Carolina. The flag remained the official state flag when the War for Southern Independence ended. The palmetto tree represents the defense of Fort Moultrie, built of palmetto logs, against British attack in 1776. The most misunderstood piece of symbolism on the flag is the crescent, which some refer to as a 'new moon.' It is actually a gorget symbol that was worn on the caps of South Carolina revolutionary war soldiers. Worn for centuries as a part of body armor, a gorget is a steel collar designed to protect the throat in battle. Both the gorget and the palmetto tree emblems symbolized defensive prowess.
Posted by SCV Camp 36 at 7:08 PM